One of the drawbacks to Yukon genealogy research is the lack of online record sets. A good site to help your research is YukonAlaska.com.

The site has compiled information from the massive 6,000 page database from Murray Lundberg. They have organized the information into several categories.

While everyone thinks of the gold rush miners, there were many others who flocked to the Yukon. Some of them made their money by operating establishments that catered to the miners. This alphabetical list of over 1200 names Includes many women, which is exciting to see. Women tend to be left out of historical records if they didn\’t come from wealthy backgrounds. Each entry gives the name of the establishment they own or ran, location, and years it operated. Some enterprising souls ran more than one. here\’s a section of the D\’s that show several people that belonged to more than one venture 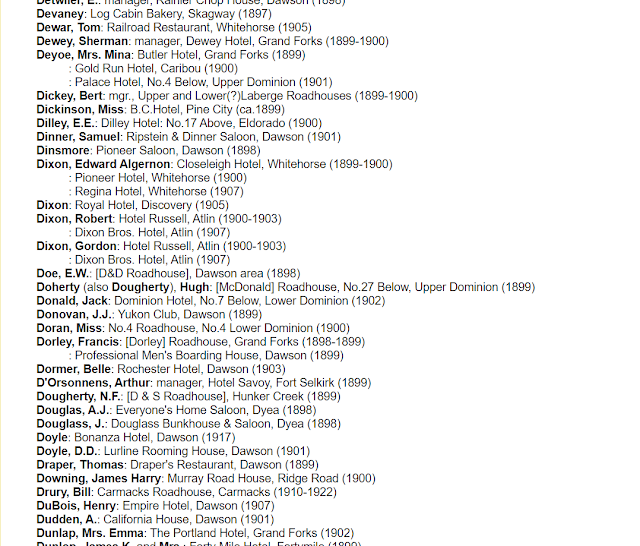 The British Yukon Navigation Company\’s River Division built and ran steamer ships, and dominated the traffic of the Yukon river for the first half of the 20th century. This handy index lists all the personnel records held by the Yukon Archives. If you find your ancestor, you can order a copy of the file from the Archives\’ website.

Information that can be found in the employee files can include:

The amount of information you can get from these records make me wish I had a steamboat ancestor. The finding aid from the Yukon Archives states that the occasional record from the Air Division is included in the fonds.
Ship Passenger Lists
This section lists the passengers on the following ships in 1899
They have also provided a link to Explore North\’s comprehensive lists of vessels that traveled within both Alaska and the Yukon.
The Matanuska Colony: The New Deal in Alaska
This takes you to another page on the Explore North website. It provides a good overview of the history of the Alaskan colony. It also gives the names of the 203 families living in the colony at the time when the draws for land tracts was held. Though this section is not Canadian history per se, there was much travelling between Alaska and the Yukon in the past. It\’s worth a look if there are gaps in your ancestor\’s history.

http://www.explorenorth.com/alaska/matanuska_colony.html
Klondike Stampeders
If your ancestor was an American or Australian who got gold fever, you might find them on these lists. There are four lists, compiled from the \”Pan for Gold\” database at the Dawson Museum in Dawson City, Yukon
The lists show what checkpoint they came into the Yukon through. You can find out the date and checkpoint. They also have death/departure details for many. For those who died, they list the death date and location. For those who left, they list departure date and address they are going to. A separate group of those who died in the Chilkoot Avalanche in 1897/98 have their own section. here\’s the list of California

http://yukonalaska.com/pathfinder/gen/CaliforniaDb.htm
Biographies of Yukon & Alaska Pioneers
This section takes you a series of biographies of people connected to Alaska, the Yukon, and the Arctic in general. Some listed can be as simple as an obituary. Others are extensive, including photos are reference material for further reading. Here\’s part of the biography for the colorful John Leonard, who was a balloonist in the Yukon in 1899. It even has a photo.

Other Yukon & Alaska Genealogy Resources
This last section contains links to help you further your research. It has links that cover not only Alaska and Yukon, but the Northwest Territories and Nunavut too.