Those of us with Nova Scotian ancestry are very excited that the Nova Scotia Archives recently redesigned their Civil Registration section on their website. We\’re ecstatic that downloads of records are now FREE. Now, downloads were quite reasonably priced before, but I know for myself that I only ordered records for my direct line. Collateral lines I only viewed the records, which were always free to view. But the old version\’s zoom function was clunky and the records could still be hard to see. I decided for this post to check the site out and see what I could find.

My first thought when going to the redesigned page is how clean and modern the site looks. The design also now aligns with the rest of the website in appearance.

The History of Civil Registration in Nova Scotia.

Though registration began in 1763 for marriages, mandatory registration for BMDs didn\’t happen until 1864. However, between 1877 and 1908, registration requirements lapsed for births and deaths. Because of this, there are a lot of gaps. Unfortunately for me, my great grandmother Edna Johnson\’s birth falls into this time period, and there is no record of her birth with NS Vital Statistics.

Don\’t lose hope though. Delayed registrations of births happened for many years after 1908. These delayed registrations can be a gold mine, because of the supporting documentation provided. Here\’s a good example among my collateral line of the surprises you can find. Edna\’s oldest son Burrell BOUTILIER was born in 1912. He falls outside the gap in birth records, but later in life he appears to have ran into problems as to his legal name. When I searched for his birth records, I found this

But then I also got these supporting documents 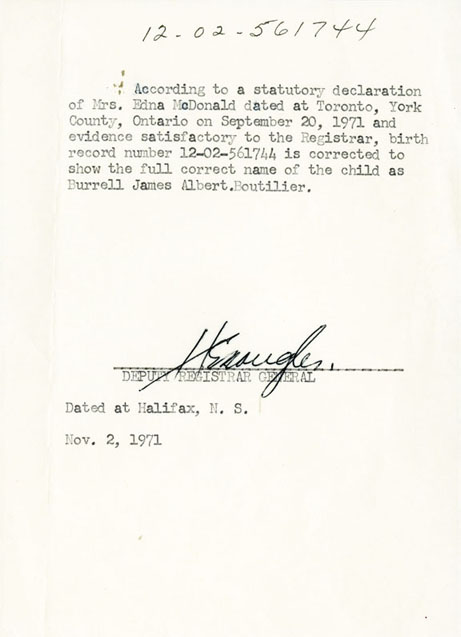 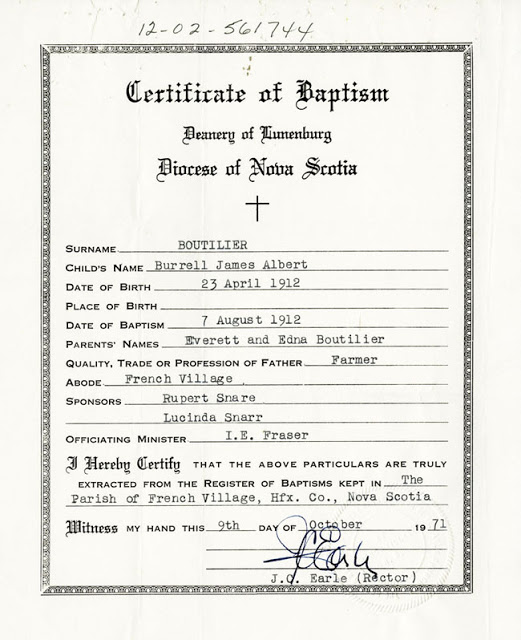 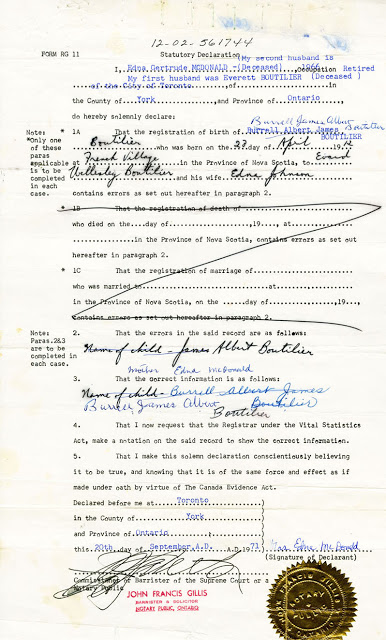 Not only do I have a copy of his baptism, but a legal affidavit signed by my great grandmother! I\’m especially excited by it because the affidavit was signed less than a year before I was born.

If you\’re wanting to search just by a last name, just enter it into the search field. This method of searching will result in a huge amount of results. For a more targeted search, click on the More Search Options 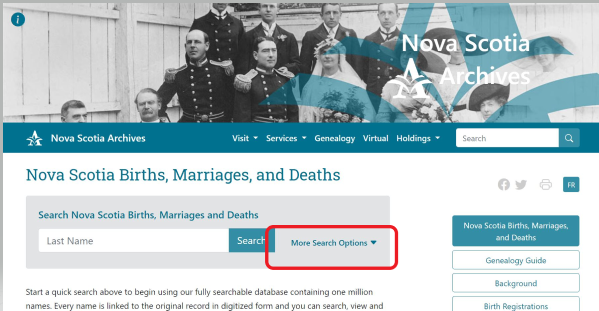 This will open up the search box to this

On your results screen, you can filter the results by births, marriages, or deaths.

My great grandmother Edna had a little sister listed in the 1911 Canadian Census transcribed as Lana. She was gone from the 1921 Census. I found this record when I was first starting out in genealogy research, so didn\’t know enough to question the transcription. I was also not as interested in collateral lines. Almost 15 years later, I\’m much more proficient at reading handwriting. I\’ve also learned the importance of looking at siblings. I looked at the record again. Analyzing the handwriting made me realize that her name wasn\’t Lana, it was Iona. I decided to see what happened to her. According to the Census she was born in 1910. So I did a search of an Iona Johnson in Halifax County. Only one result popped up, for a Nina Iona Johnson. When I clicked on the birth record, this is what popped up on the screen.

Now the big image you can zoom in and out of. It\’s the little one you want to click on though. This will open the image in a new window. Here you can also zoom in and out. Here is also where you can download the image to your computer by right clicking and using Save image as…

So I found her birth. But what about a marriage or death? I tried using Nina Johnson/ Johnston/ Johnstone and no results. I was stumped. I put it to rest and started looking at other collaterals. My great grandmother Edna had a child die quite young with her first husband Everard Boutilier named Wesley Boutilier. I decided to find Wesley\’s death registration. I found it, and lo and behold right next to it was Nina Iona\’s death registration. For some reason she was registered under Boutilier.

I really like the new and improved site. Once you get the hang of the changes in navigating it, the site is actually very user friendly. The fact that records are now free to download is a boon to those of us with large families having large families.  I am hoping that the NS Archives will eventually add the following features:

2 thoughts on “Nova Scotia Ancestors: Civil Registration Gets a Makeover”