Now I know this doesn\’t sound like a very exciting resource if you\’re not a religious scholar. But there is good information to be found in this collection. For instance, did you lose track of what happened to Charles Pickles? Well according to the 1875 Conference, he left to become part of the Missionary Committee in London.

If you\’re looking for names, the first half of the conference minutes is where you want to look. They were very thorough in listing who had become full fledged ministers, and who was working their way through the levels. Here in 1876 is the list of those who have been \”admitted into full connexion\”, and those still hoping to attain it.

Deaths were also recorded. Here is one recorded in the minutes of the 1877 Conference. It gives so much information to follow up on in just one short paragraph!

If you\’re interested in the works and general details of the Methodist Church in Newfoundland, then the second section of the Minute Books will be of interest. In here is general information on the size of circuits, and the number of marriages and baptisms performed in each. Here\’s the total for the St. John\’s and Carbonear Districts in 1877.

There are also reports of Committees throughout the second half. Even in these you will find names scattered among the reports. Here in the disbursements of the Contingency Fund in 1879, Bros. Parkins and Bryant were given money for their \”afflictions\” 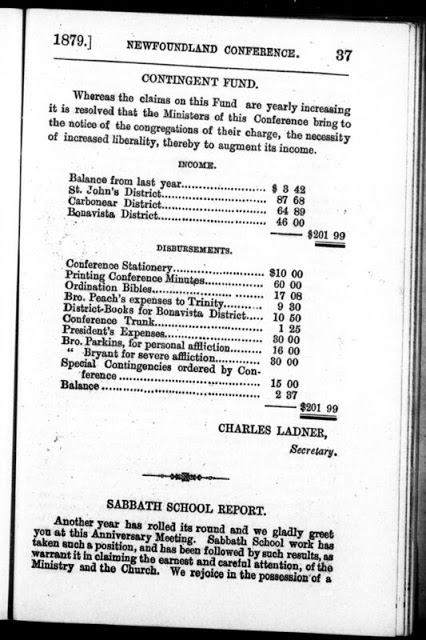 As a last example, here\’s a list of people who subscribed or donated to the Bona Vista Circuit in 1878. 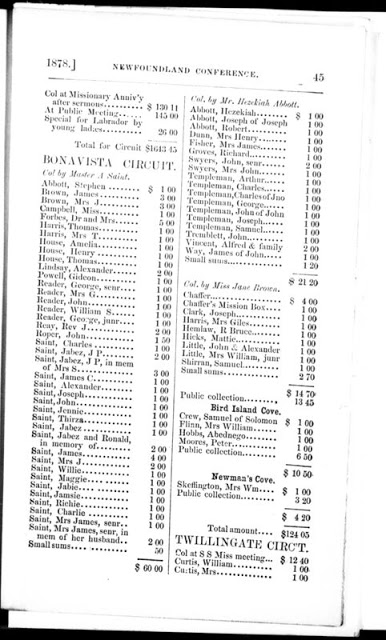 While you\’re at it, also check out the Annual report of the Auxiliary Missionary Society of the Newfoundland Conference. These also have to do with the Methodist Church. There are 5 issues: