The person I\’d like most to meet though is my great grandfather John Wellington MCDONALD. He\’s been my biggest brick wall, and I\’d love to find out more about him. It frustrates me to no end that the man who my surname comes from is the one I know the least about. Every bit of information I\’ve got on him was hard won. All records I have about him state he was born in Ontario. Somehow between 1922 and 1925 he went to Nova Scotia and met my great grandmother, and ran off with her to Ontario. My sadly short time line pertaining to John is as follows.
14 June 1894?
John\’s marriage and death registrations give birth calculations of 1894 and 1896. I have not been able to find a definitive birth registration for him.
27 June 1922
Edna marries her second husband Adolphus FREDERICKS in Halifax, Nova Scotia. Record obtained from Nova Scotia Historical Vital Statistics.
,
26 January 1925
Jack and Edna are in Ontario. My grandfather Edward James MCDONALD is born in Cochrane, Ontario. Information obtained from family.

1 August 1932
My great aunt Pauline MCDONALD is born somewhere in Ontario. The date of birth came from her death registration.

14 November 1934
Pauline dies of the flu in Toronto, Ontario. John is in the informant on the death certificate and stated he was born in Ontario.

25 June 1935
John and Edna have a still born baby boy in Toronto, Ontario. Jack stated he was born in Kingston, Ontario.

19 March 1956
John and Edna finally decide to get married. I\’m not sure if the late wedding had to do with pension concerns, or if it was because of Edna\’s second husband. A death certificate for Adolphus FREDERICKS has never been found. John states he was born in Ontario, and the son of John Angus MCDONALD and Mildred MURPHY. He states they are immigrants from Ireland. John also states he is a bachelor.  Information obtained from their marriage registration. 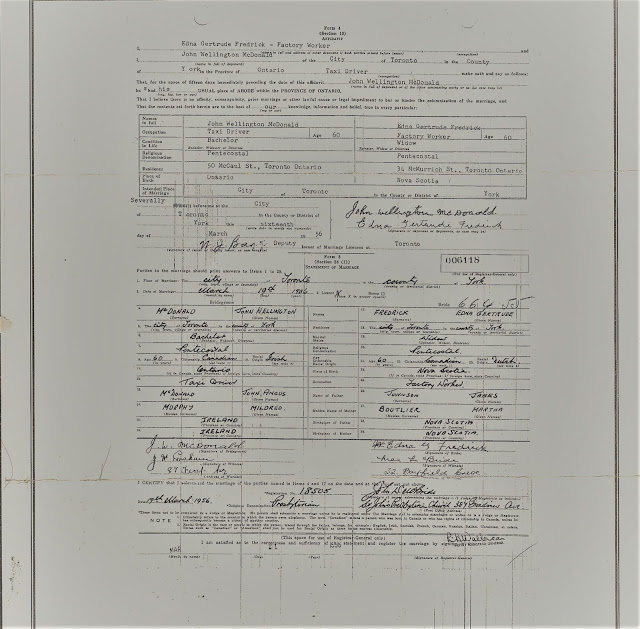 1958
John is a taxi driver, and the family has moved to 415 Christie Street in Toronto, Ontario. Obtained from Ancestry\’s Canada Voter\’s Lists collection.

5 February 1964
John dies in Greenacres Nursing Home in Newmarket, Ontario.  Information obtained from John\’s death certificate. Edna was the informant, and stated that she did not know his parents\’ names, only that they were born in Ireland. Which says to me she never met them. 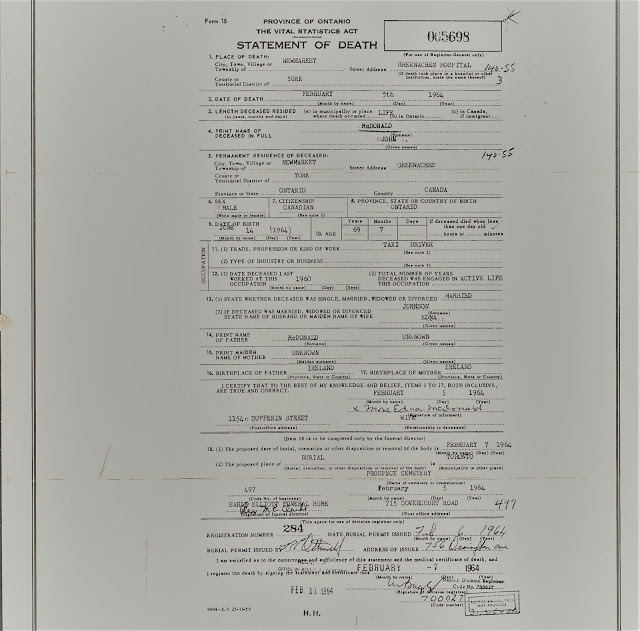 Unfortunately his obituary in the Toronto Star does not give any information either.

In summary, this is what I have about John:

The information I have about John was obtained from the following record sets:
What I am still looking for is a record of John\’s birth in Ontario. I also have yet to locate him before 1925. I have found no definitive record of him with either of his parents. In fact, I have found no definitive records of his parents in Canada.
Interestingly enough, there is a John Wellington McDonald born in Nova Scotia in the 1870\’s. He is NOT my John however. Firstly, this John was born about 20 years before my great grandfather. Secondly, once I \”killed him off\” Nova Scotia John, I found that he married someone else, and is buried with her in Nova Scotia.
My next steps to find out more about my tight lipped ancestor John:
If your family tree has a John MCDONALD that you think might be my great grandfather, I would love to hear from you. My contact information can be found on the Contact Page tab.